We may take the stand for the prosecution or the defense, depending on the conclusions reached regarding the items in question 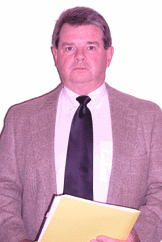 Jim Hartwick is a thirty year veteran of Law Enforcement. For the last eighteen years of his career, Jim worked as a criminal investigator for the St. Louis County Prosecuting Attorney’s Office. In this role, he analyzed violent crime prosecutions and developed case-specific evidence to aid in the prosecution of major felony cases.

Jim has assessed the effectiveness of expert and lay witnesses in hundreds of felony trials, and routinely has prepared these witnesses for courtroom testimony. Jim retired in 1999 and opened his own investigative business that focuses on a variety of criminal and civil investigations including product and premise liability.

Jim currently is a contract investigator for the United States Department of Defense performing background investigations for prospective federal employees. In 2001, Jim spent a year with the United Nations Mission in Kosovo (former Republic of Yugoslavia) where he served as an International Police Officer. He was responsible for the training of Kosovo Police Service (KPS) officers, was Chief Investigator for one of the regional stations, and was regularly involved in anti-terrorist operations in conjunction with Russian and U.S. Special Forces. Jim has a B.A. in Administration of Justice and an M.A. in Security Management.

Fill out my online form.